Tons of snowboarders and skiers conquer the slopes of winter resorts worldwide. These sports are perhaps the thing half of the world population does in winter. These activities hit the top 10 the most popular fresh snowy sports. And the fans usually start to furiously argue with each other trying to prove their snowboards are better than skis and vice versa. Ski resorts even prohibit board riders. Listening and seeing all these people messing around, we decided to make a comparison of these two activities.

We will start by making definitions. What is snowboarding? This activity involves sliding downhill the mountain slope on a snowboard. Skiing involves sliding downhill the slopes and also traveling on snow with the help of skis. It is impossible to move forward on a flat and straight surface. And this crucial difference changed everything and made the two winter activities so different. Both sports are disciplines of winter Olympic and Paralympic games.

Skiing is an ancient activity. Its first evidence was about 6 thousand years old and discovered in northern Russia. During the prehistoric period, skis were used as the means of transport through the snow. It was used by hunters, farmers, and warriors. The first ever use of it as sports was introduced by Norwegian and Swedish troops in the 18 century.

They performed exercises with skis as part of their military training. The first ever public competition took place in 1843 in Norway. This activity has been constantly evolving and nowadays here is the basic list of “must have” items for the rider: skis, boots, bindings, poles, a helmet, goggles, a jacket, and a backpack. 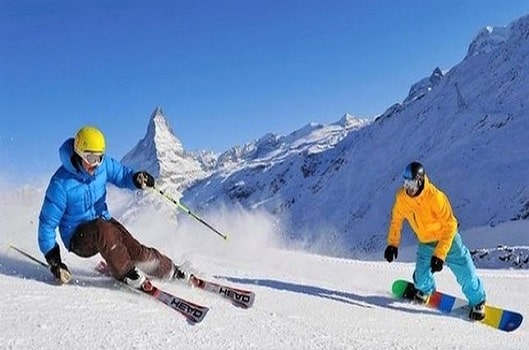 Skiing is not actually that difficult than it seems to be. You can learn basic riding techniques within 3-5 days and be able to slide without hesitation. The difficulty, however, covers lies in gravity. When your feet are fixed with the skis, it is hard to switch to these specific movements for the first time. Your body has to get accustomed to this. But, again, it takes a few days. The best way to learn the basics is to practice with a coach.

There are lots of riding styles when it comes to skiing. Sliding downhill the slopes is the most common, alpine variant. The rider gets to the highest altitude and goes down the mountain. It is as fun as dangerous. Nordic riding is the riding manner when your heel is not fixed to the binding. Another name for it is “cross-country”. It requires decent physique since you pull yourself forward instead of gravity on a slope. Freestylers focus on performing tricks in the air, jumps, and turns.

Different styles of skiing are incorporated into the winter Olympics and other world skiing championships: 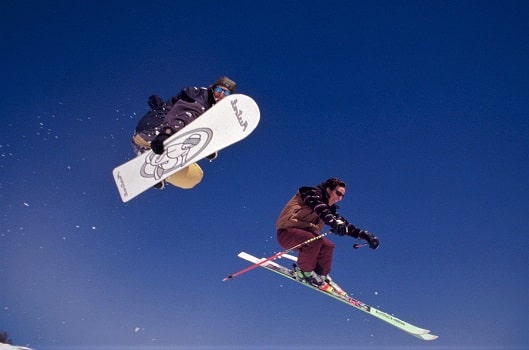 Compared to skiing, snowboarding is quite a modern sport. It began as the attempt to bring surfing to the snow surface. Sherman Poppen is a founder of this sport. He was a surfer and built the very first snowboard in 1964. Years later, many enthusiasts picked up this idea.

Now we see the flourishing sports with a huge fanbase all over the world and international competitions organized by the biggest federations. If you want to try this winter activity, your equipment should consist of a snowboard, the bindings, boots, a backpack, gloves, goggles, warm outfit, and a helmet.

Snowboarding is a little bit more difficult to master. Newbies will get stuck while learning to maneuver. Since the position of the feet is fixed and not parallel. Due to the specific stance, you need to change the mass centers by turning and angling the whole body. Stopping is also a tricky thing since you have no poles and cannot change the stance.

Another important thing is to determine which front foot feels better for you. The best way to learn to snowboard is to practice within group courses. You can still learn on your own but it can take much time and efforts.

Similarly to skiing, snowboarders ride differently and the styles differ significantly. Here are three basic ways of sliding on a board:

Snowboarding has been an Olympic discipline since 1998. The competitors perform tricks, jump high and long, slide downhill with insane speed. Also, the contests include slalom variations. The biggest championships include FIS World Championships, Winter Dew Tour and Winter X Games.

Which Sport Has More Risk?

Well, any professional activity and sports where speed and reaction involved are risky and dangerous. We cannot say that skiing or snowboarding is less risky. Both sports can make you a physically challenged individual. However, the frequency of particular injuries differs in these two sports.

When it comes to skiing, you risk breaking your legs more than in case of riding on a snowboard. And irresponsible riding the board can cause tailbone and spinal fractures. In both activities, your knees, feet, and ankles get much stress. And besides that, you can fall, get stuck in the snow or crush into something and break your limbs easily.

From the social perspective, both groups use a specific lexicon to denote their equipment, name the features and create new terms. Skiers and snowboarders tend to make everything sound scientific and serious. Angulation, sidecut dimensions, contortion, counter rotation, edge transitions are the words you can hear being at winter resorts. Sounds like some aerodynamics manual. This heavy slang, however, mixes with off-piste, jibbing, powder, big air, blower, park rats and disco tricks.

Both sports are thrilling and captivating. You can perform breathtaking tricks with skis and snowboards. Objectively, each sport and every sportsman regardless of their style, and equipment deserve respect. Both activities require years of training, incredible strength and stamina. Snowboarding requires much effort to get accustomed to the early stages. Skiing toe to separate feet position is biomechanically easier at the beginning.

On the other hand, it becomes tricky when you go further. In fact, the true sportsmen do their best and never pay attention to such weird silly disputes. Deciding which snow sport is better is like comparing a watermelon with a melon. It makes no sense since it is a personal choice, everyone is at liberty to make. And no one should condemn the individual because of their choice.