When you hear about winter sports you probably imagine some activity performed on the snow or ice. These include competitive sports like snowboarding, skiing, sledding, and their regular non-competitive variants. This time we will define all the existing winter sports, briefly explain the rules, and name famous personalities and athletes. We have divided all the activities into three types which include sledding, snowsports, and ice activities.

It looks funny and nice to others when people slide down the hill by sled. But there is a strong tension between competitors and a real danger when it comes to the Olympic competitions. Sledding is a racing sport, which involves high speed, and incredible piloting skills. That is why special equipment is used in this sport. The main equipment here is basically a sled. It can reach an average speed of 80 km/h. For safety purposes, pilots use helmets, goggles, vests, spike shoes, and special protective suits. The objective of the game is to reach the finishing line as fast as possible. The sport has been an Olympic discipline since 1926.

Bobsledding is a very fast variation of sledding. It is performed on special ice tracks. The ice tracks are incredibly smooth and polished to allow pilots to gain as much speed as possible. Each is about 1200m long. The sleds start at the elevation and are pushed downwards to the tracks. The maximum speed ever reached was 125mph. A sled of a complex arrangement is used. It accommodates up to 4 people. It also has steering rings for maneuvering.

Dog sled racing became incredibly popular at the beginning of the 20th century. While bobsledding relies on gravity as a pulling force, in this sport dogs pull a sled through the snow. There are three types of dog sledding which include sprint, mid- and long-distance competitions. However, it is not a conventional race, but a kind of marathon. A sprint event can take up to 3 days with an average speed of 10 miles a day. It requires using animals of incredible stamina and power. The most famous competition is the Iditarod Trail. The mushers equip the sleds with supplies for a trip of up to 15 days. 14 dogs are involved. The distance reaches 938 miles.

Snow luge resembles bobsledding. It is a mini-version of this sport with small sleds (luges) involved. The sled weighs from 20 to 30 kilos. The sport is done on the ice tracks. A pilot gets horizontal with their feet directed forward. They push pedals to direct the vehicle. The goal is to cross the finishing line as quickly as possible. The time is measured in centiseconds.

Snowmobiling belongs to extreme winter sports. A snow scooter is used here. It is a powerful vehicle aimed to move on the snow incredibly fast. It can go fast on the ice as well. A snowmobile can go at up to 200mph. No special track is required. The races are held on any terrain including dangerous backcountry — elevated, steep and full of dips.

Tobogganing is a variation of sledding performed with the simplest sled. It has no skis and its bottom touches the snow directly. It is made either of wood, or hard plastic. It is narrow (about 18 inches wide) and can be up to 9 feet long. A rope is used to perform basic steering.

The most precise description of kicksledding is skating on a chair with mounted runners. The chair back has a handlebar. You can carry over your children in this chair if you are tired of pulling a regular sled. The sport can be done by children as it does not require any special skills. It is not included in the Olympics as well.

People who invented the Olympics loved extreme activities. Skeleton is one of the most dangerous winter sports. It is very similar to snow luge with a few differences. The pilot should get horizontal but head first and down. Thus, if something goes wrong, the pilot’s head gets injured first. It is also performed on special ice tracks. It was included into the Olympics permanently in 2000.

This kind of sledding involves a regular type of sled pulled by horses. A relay of 2 horses is usually used. It is rather a family activity than a competitive sport. No Olympic sleigh rides have been organized for today.

Snow tubing is basically sliding down a slope on a big plastic doughnut. It is an entertaining activity performed on specially designed pistes. If you want to try this, you should put on waterproof clothes since your suit will have contact with snow and ice directly. 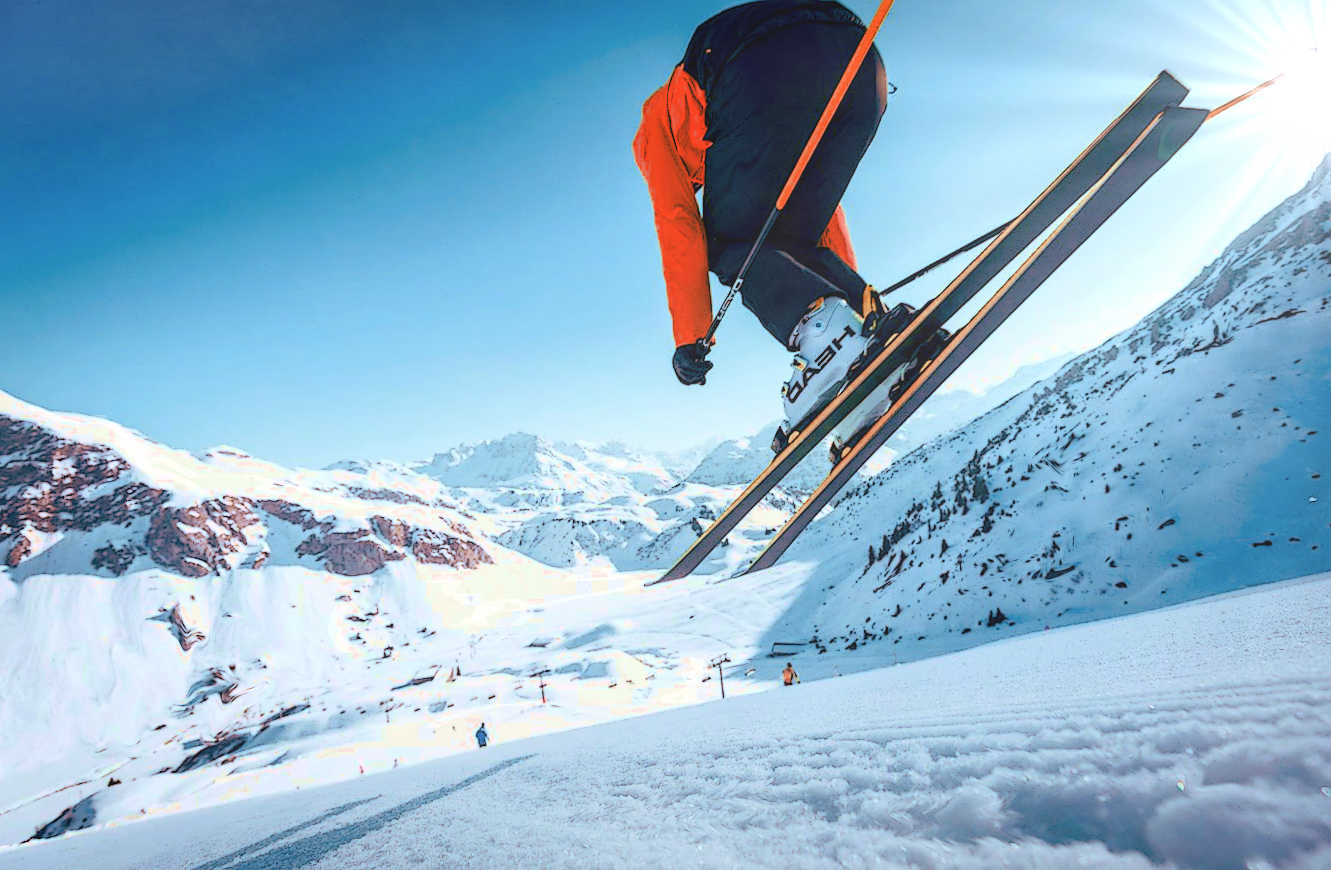 As a rule, these types of winter sports do not involve massive man-operated vehicles as the main part of the equipment. However, they are as spectacular as sledding. Snowsports are mainly performed on snow pistes within winter resorts and backcountry terrains. Athletes use snowboards and skis as equipment. The equipment predetermines the nature of the competition. The events include either speed racing or stunt performance.

The most famous athletes in these sports include:

As mentioned above, snowboarding is a winter sport performed on a snowboard. Other equipment includes protective and waterproof outfit (goggles, gloves, boots, a warm jacket, various types of bindings). It became an Olympic sport in 1998. The athletes are to perform air tricks most of the time.
Recreational snowboarding takes place at winter resorts within snow pistes, terrain parks, and backcountry terrain.

Skiing emerged much earlier than snowboarding. It was recognized globally and included in the Olympic Winter Games in 1924. The athletes perform stunning tricks, compete in the speed events and generally do very spectacular things with only skis and poles. There is a large variety of sports events including alpine, cross-country, Nordic style, and freestyle skiing. We will describe them in more detail below.

Skiboarding is a mixture of snowboarding and skiing. The skiboarder uses a pair of skis fixed together forming a snowboard-like glider. No poles are required. Since 2000, it has no longer been an Olympic discipline. Nowadays, skiboarding is primarily a recreational activity. With a hybrid glider, athletes can perform tricks like snowboarders, but be more flexible in movements like skiers.

Alpine skiing is performed high in the mountains, usually. An athlete gets to a high altitude by the resort lift system and then slides downhill. Alpine variation differs from other skiing styles in the manner of ski binding. The heel is fixed unlike in the rest of the skiing sports. Backcountry alpine gliding requires a helicopter for transporting athletes to remote places. The Alpine event has been present at the Winter Olympics since 1936.

Cross-country skiing involves walking across the snowy terrain. The athletes’ boots are not fully banded with the ski. The heel is not fixed. This allows wandering by skis and thus covering long distances. No winter resort lifts are required for this skiing variation. It is massively practiced as a recreational activity. This skiing style has been an Olympic discipline since 1926.

Similarly to snowboarding, freestyle skiing is an activity which involves performing air stunts. It was first introduced at the Winter Olympics in 1988. The regular events were introduced in 1992. This variation involves several types of competitions such as half-pipe and slopestyle events where athletes perform tricks. Ski cross and mogul events belong to speed races, where competitors have to finish first, overcoming various obstacles.

Nordic Combined is a standalone skiing Olympic discipline where athletes compete against each other in two main events:

The results in two events are combined. The athlete with the highest score wins.

Ski jumping is one of the most spectacular winter sports. An athlete accelerates, slides onto a special ramp, covers a certain distance in the air jump and then lands on the specific hill. The covered distance, the posture during the flight and the manner of landing are evaluated. These Olympic events started in 1924.

Snowkiting is basically paragliding on the snow. The climbing power allows performing longer jumps, and stunning tricks. Overall, it is a fun recreational activity every skier or snowboarder should try.

This is a cool and refreshing version of horse polo. The field where the two teams compete is covered with snow. The rest of the rules are the same. The four-player teams use mallets to kick the ball. Horses are equipped with frost shoes for better grip.

Winter Triathlon is a competition consisting of multiple disciplines:

All of the disciplines must be performed on the snow. World Championships are organized yearly.

Competitive ice sports are all performed exclusively on the ice. The basic equipment includes ice skates. However, in most of the ice sports, athletes use protective helmets, elbow cushion and knee supporters, and warm waterproof outfit. One of the recent records in this sport belongs to ice skating. Vishwaraj Jadeja, an Indian ice skater, managed to glide on the frozen surface of Tso Moriri lake in 2019. The Lake is located at the altitude of 14,835.958ft (4,522m).

This sport is performed on the ice rink with four circle areas. Athletes use special brooms to slide the granite stones towards the circle areas on the ice. The two teams consisting of four players are involved. A team wins if it gains maximum score within 8 rounds of the game. It is a winter Olympic event officially featured in 1998.

Boats can float not only on water, but on ice as well. The boat’s underside has three blades which allow gliding on the ice. The vessel moves through sailing as in the case of the ordinary boat. Although this sport is not included in the Olympics it is incredibly popular in the USA and Canada.

Fishing on ice has been a hunting method used by people living in the subarctic regions. Nowadays, ice fishermen organize contests to make the activity more fun. The largest ice fishing competition was organized on Gull Lake in the USA in 2019. More than 15,000 people came to pull some fish out of the drilled ice holes.

The sport is done in the rink. There are two nets on the outermost sides of the rink. The two teams of six players kick the puck with sticks to the rival nets. The teams need to gain the highest score by making the most goals within 60 minutes. It was included into the Olympics in 1920.

Ice climbing is an extreme sport which requires years of experience, stamina, strength, and courage. In this sport, the athlete climbs an ice glacier, mountain cliff, frozen waterfall, etc. The purpose is usually to reach the top of the mountain. Ice axes, rope systems, hiking boots, and protective suits are used.

In this sport, canoe crews push the 250-pound vessels across the frozen rivers. It became a sport in the 1980s and was first introduced by the Canadians. Up to 40 teams can participate in a competition. Originally, this way of crossing the river was the only option for French people to cross the Saint Lawrence River in the 17th century.

Ice racing is a sport which includes speed races on various vehicles capable (or not) of traveling on the ice.

The vehicles used in this sport include: